The LG Stylo 5 is a large phone, nearly identical in physical size to the OnePlus 6T. It's also fairly thick, not only to accommodate the stylus but also because there's a large 3,500mAh battery inside. The LG Stylo series has been a staple offering at prepaid carrier stores for years. LG’s Stylo handsets have been just about the only budget-friendly phones on the market to feature a built-in stylus, but now they finally have some competition in the form of Motorola's Moto G Stylus. The stylus-equipped Stylo 4 received fairly positive reviews when it was released back in 2018, and now LG has followed it up with a sequel. The Stylo 5, also known as the Stylo 5V, Stylo 5+, and Stylo 5X, has an upper hand in the stylus department, has a larger battery, and is more rugged, but is mostly similar to the Stylo 4. Features include a full-HD 6.2-inch display, stylus, fingerprint reader, 13-megapixel camera, memory card slot, and 3.5mm audio jack.

The Stylo 5 measures 6.30 by 3.06 by 0.33 inches (HWD) and weighs 6.4 ounces. The front of the phone is dominated by a 6.2-inch LCD with very chunky bezels, for a 79.8 percent screen-to-body ratio. The resolution comes in at 2,160 by 1,080, for 390 pixels per inch, with an 18:9 aspect ratio, uses Android v9.0 (Pie), a Snapdragon 450 processor paired with 3GB of RAM, storage comes in at 32GB, of which 18GB is available out of the box. If you need additional storage, you can add up to 2TB with a microSD card. While the LG Stylo 5 features a plastic back that should be able to handle everyday dings and drops, you’ll find a single camera lens and a fingerprint sensor at the top, and LG's logo at the bottom.

The LG Stylo 5 is available unlocked and in different variants for every major US carrier. It’s important to note that different versions of the phone support different LTE bands, so some may not work well if you move them from one carrier to another. For that reason, UnlimitedUNLOCK has an Unlock service for all the new LG phones including the LG Stylo 5 model. If you purchase an unlocked version directly from Amazon, it should support LTE bands. A performed network tests with a Stylo 5 variant made for Verizon's prepaid recorded underwhelming average speeds of 13.4Mbps down and 9.8Mbps up. These speeds are likely due to the phone's Qualcomm Snapdragon X5 Category 4 LTE modem, an older 2x20MHz modem with 64-QAM modulation. You also get Bluetooth 4.2 for wireless audio and wearable connectivity, dual-band Wi-Fi, and NFC.

Like most budget phones, the Stylo 5 can take acceptable photos with plenty of light, but the quality falls apart in dark environments. The Stylo 5 features a single 13MP rear camera with an f/2.2 aperture, as well as a 5MP front-facing camera with an f/2.2 aperture, phone can record in 1080p at 30fps.   If you really want a budget phone with a stylus, and the lack of future Android updates isn't a concern, the Stylo 5 isn't a bad choice. It offers a great design, good performance, and fantastic battery life. A complete review can be seen on the GSMarena page. 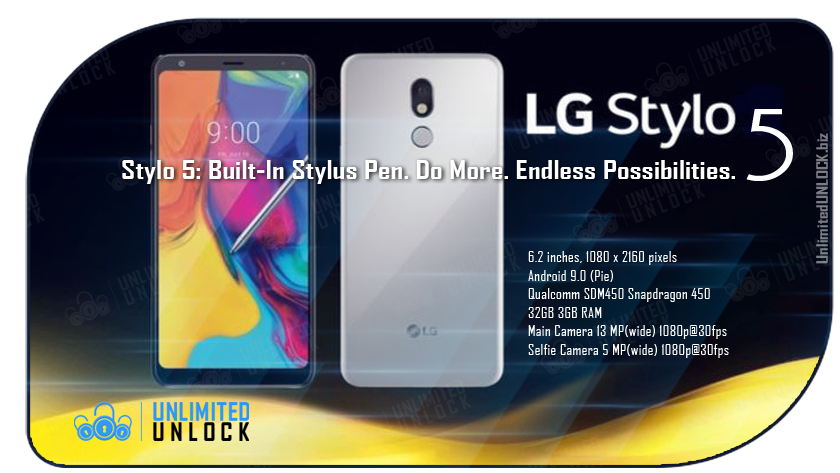 This phone is designed to work on select GSM networks and is 4G LTE capable. LTE is an advanced cellular network data protocol capable of data speeds so fast that they compete with wired broadband Internet providers. With an LTE connection, this phone should have no problem streaming HD video, downloading apps, uploading photos, or anything else that requires a high-speed data connection. The phone is also backward compatible with 3G and 2G data for instances when you can't get LTE. In addition to cellular wireless, this phone also features Bluetooth, NFC, and Wi-Fi connectivity.

If you bought your LG Stylo 5 from a network service provider either on “pay as you go” or “on contract” most probably your LG is locked to that network and you are not able to use it with other carriers. If you want to use your device with other GSM SIM cards you need to unlock LG Stylo 5. The SIM lock activation means that your mobile phone device can only function with the SIM card of the carrier who sold you the LG Stylo 5 and with whom you have signed the 12 or 24 months contract.

One of the bright sides is that you can always attempt to unlock your brand new LG Stylo 5 - meaning an unlock that will allow your LG Stylo 5 to function on any SIM card by any carrier anywhere (Worldwide).

So, if you have just signed a contract with your carrier and purchased an LG Stylo 5 have a look at the SIM unlock procedure described below.

Why should you SIM unlock your LG Stylo 5?

And why not? Who is to say that you are bound to use one carrier with your LG Stylo 5 when you can use the services of any carrier in the world you want. You already pay the installments for the device, and you’re bound by law to do so. There is no problem with that. You want the device, and you will pay for it one way or another. But there is a problem when you have to use the services of one carrier only for two years. Let’s say that you have bought your LG Stylo 5 from T-Mobile, but most of your relatives use Verizon. Your relatives are paying less on their monthly bills. The math doesn’t add up, and all logic points to the fact that you need to change the carrier.

What needs to be done to remove the SIM lock activation from your LG Stylo 5?

Get in touch with one of our customer support agents; they will advise you of the best SIM unlock solution for your LG Stylo 5 mobile phone device. 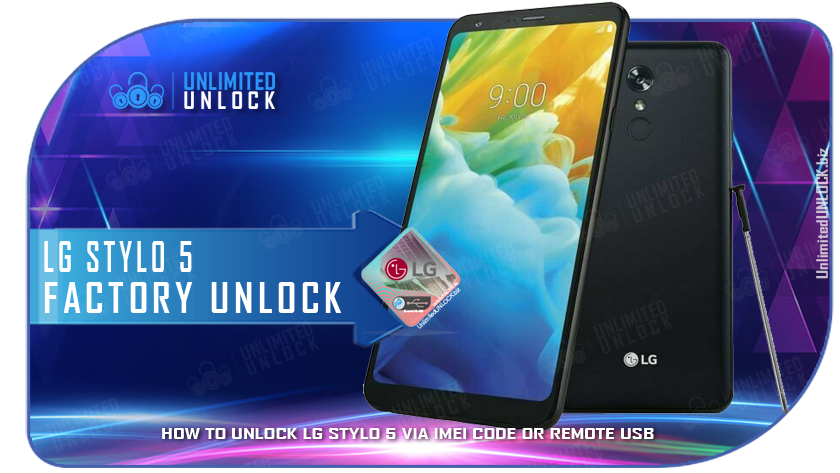 To be able to enter the SIM unlock code you will need to make your LG Stylo 5 ask for it. There is only one way for you to do this. Enter a SIM card from another carrier than your current one and power on your LG. Upon starting, you will be noted that the SIM card cannot be used and you will be prompted to enter an unlock code if you want to proceed.
Enter the SIM unlock code you received via email. Click ok, and your LG Stylo 5 will be permanently unlocked.

To complete the unlock processes using the Remote USB Unlock for your LG Stylo 5. You will need to visit the Live Chat link you will receive via email and one of our professional techs will assist you in completing the processes.

The UnlimitedUNLOCK Team is Trusted by Millions and has become an industry innovator and leader providing cellphone unlocking solutions for over 10 years. We've been helping out users from all around the world, and the SIM unlock story ends happily for all whether it is a Samsung, Motorola, ZTE, LG, Alcatel, HTC, Huawei, Sony, Pantech, or iPhone users. There is no reason to doubt this service - there are too many happy clients from all over the world who have already given feedback and are happy to confirm their success story. There is no good reason why you should not trust UnlimitedUNLOCK and have your LG Stylo 5 unlocked.

If you simply have one LG Cell Phone to Unlock  -  Let's Get Started by choosing your phone here...

Can I get my LG Stylo 5 cell phone unlocked online?

Get your LG phone unlocked via IMEI Code or Remote USB with no threat to the device’s warranty.

Unlocking your LG phone doesn’t request any effort (almost). You just have to send us the phone’s IMEI number and the name of the service provider that locked it. What we’ll do is search several databases looking for your unlock code. Once found, we’ll send it to you accompanied by clear info about what you have to do to unlock the device.

Why order an LG Stylo 5 Code?

What if there have been modifications to my LG phone’s software?

What if my LG device doesn’t react to the unlock code?

Here are some requirements you need to follow prior to ordering an LG Stylo 5 unlock code:

If you bought your LG Stylo 5 in the USA and it’s locked on T-Mobile and MetroPCS, make sure you’ve put in place the Device Unlock app. Then forward your request using our Device Unlock App Service.

What do I do in case I have no idea what’s the network that my LG is locked to?

There’s no need for you to we've got you covered. You'll be able to get that information by using our LG Info Check by IMEI [Manufacturer | Country | Carrier | Serial #] in order to get your device's original network. This service is also used when you want this info for a different reason, such as buying a phone that’s been used, you can get the details you need using our original carrier check.

What do I need if I want to unlock LG Stylo 5?

Let's Get Started by choosing your Unlocking method here...